Golfeados are a part of every Venezuelan’s childhood memory. They are similar to sticky buns rolled into a shape similar to that of a snail, resembling the cinnamon rolls. The folds are filled with a mixture of grated papelon (molasses-like ingredient) and white cheese, flavored with aniseed and baked.

They are usually accompanied with a slice of hand cheese, a type of salty and soft fresh cheese also typical of my country. For many Venezuelans, the ascent to Los Teques or Colonia Tovar, including a walk to Macuto, was synonymous with eating golfeados, since on each of these roads stood out a must-see stop due to the fame of these rolls.

The authors of this recipe are mentioned as the brothers Genaro and María Duarte, who were living in a barrio called Petare in Caracas, took out steaming trays from their wood-fired ovens of this amazing pastry. The Golfeado was copied immediately and became very popular across the country.

Imagine going on a road trip to the beach or the mountain, stopping to stretch your legs and savoring one or two warm golfeados with cheese! YUMMY!!!

We're not around right now. But you can send us an email and we'll get back to you, asap.

As the Coronavirus (Covid-19) health situation continues to evolve, I would like to reassure you that I am here to help and you can contact me if you have any questions regarding your policy.

There have been temporary changes in the Life Insurance business. Right now in many cases you can submit non-med and online applications for your comfort and safety. As well as 60-day grace periods in case your finances have been impacted by the crisis and you wish to stop premium payments for a while. 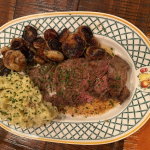